Lorde – aka New Zealand’s biggest success story of 2013 – has continued to make headlines since her single Royals took the top spot on the Billboard charts, making her the youngest artist to do so in 26 years!  Performing two sold-out London shows, it was at Brixton Academy she joked about the time she performed her first UK show at Madame JoJo’s show, a venue holding just 200 people as opposed to the current 5000 seemed disinterested in her work and was probably only present because of their bosses’ request.  As if struck by lightning dead on 9:15pm, the academy was in blackout whilst anticipation filled the gap for Lorde’s arrival. As the curtain fell, she opened with a pitch perfect performance of Glory and Gore against a background of three gold squares and a shimmering crystallized chandelier.

Dressed in a black trouser suit and crisp white shirt, Lorde’s sheer elegance is not something you’d expect from your average teen star. Flaunting herself in a provocative nature is completely off the cards here, keeps things strictly professional and gimmick free!  Belting out tracks from her debut album Pure Heroine and some earlier material such as Bravado and Biting Down from The Love Club EP, spotlights intermittently flashed giving a sense of the eerie, hair-raising weirdness Lorde also projects into her music.

Whilst Lorde is an exceptional artist to see in a live setting, her utterly uncanny performance style of jerky dance moves and flexible arched body is engaging. Lorde’s tone and pace throughout stayed the same. Trying to add some ‘shazam’ for the finale moment, she made a swift exit before returning to stage in a gold cloak to sing ‘A World Alone. Ending the night was a confetti cannon with her own logo printed tissue paper bursting into the crowd to give an added personal touch.

Overall her paradox world is one that is incredibly captivating, and I can’t wait to see how she develops from teen to a young lady. While Lorde is afraid of growing up, unfortunately just like Peter Pan this fantasy is not real.

Single of the Week: 20th Oct 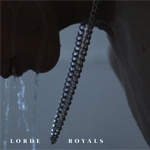 Lorde, the name rolling off everyone’s tongue at the moment as she has crept onto the scene in such an unusually smooth fashion. No in your face promotion – this young teen has shot to the top of the US Hot 100 with ease that fans have just flocked to her captivating sound.

Royals smash hit is available to download in the UK this week and should easily score number 1 slot on the big Top40. If you haven’t heard of this New Zealand treasure you should check her out as she is quite possibly the best undiscovered artist of 2013.

Album of the week: 22nd Oct

Stripped back Candy girl Katy Perry’s 4th Studio album Prism offers a darker side to our most loved Californian popstar.

Prism is a richer, deeper sound that reflects on Katy’s personal troubles of her 2011split from comedian Russell Brand.  Showing Katy’s fighting spirit Roar was the lead single from this album. A track that shows her more delicate side during this time is By the Grace of God which Katy gave an exclusive performance at last month’s iTunes Festival.  No longer a teenage dream Katy Perry has made her mark as a popstar and she is here to stay!

Video of the week: OUT NOW

You may have heard of Tanika from her appearance on Naughty Boys’ album performing one of the most known tracks of 2013 – Daft Punk’s Get Lucky. Since then Tanika has dropped her first official cut from her debut album, Bad 4 U. Produced and co-written by MNEK, Bad 4 U showcases her ability to belt out some high notes as she grinds some sexy shapes on the front of a truck!

This song is about pleading her man to leave and with Tanika underneath the truck as the parting shot, we think he got the message!